Extracts of an Article by Kevin Kelly

We are building a 1-to-1 map of almost unimaginable scope. When it’s complete, our physical reality will merge with the digital universe.

The mirrorworld doesn’t yet fully exist, but it is coming. Someday soon, every place and thing in the real world—every street, lamppost, building, and room—will have its full-size digital twin in the mirrorworld. For now, only tiny patches of the mirrorworld are visible through AR headsets. Piece by piece, these virtual fragments are being stitched together to form a shared, persistent place that will parallel the real world.

It is already under construction. Deep in the research labs of tech companies around the world, scientists and engineers are racing to construct virtual places that overlay actual places. Crucially, these emerging digital landscapes will feel real; they’ll exhibit what landscape architects call place­ness. The Street View images in Google Maps are just facades, flat images hinged together. But in the mirrorworld, a virtual building will have volume, a virtual chair will exhibit chairness, and a virtual street will have layers of textures, gaps, and intrusions that all convey a sense of “street.”

At first, the mirrorworld will appear to us as a high-resolution stratum of information overlaying the real world. We might see a virtual name tag hovering in front of people we previously met. Perhaps a blue arrow showing us the right place to turn a corner. Or helpful annotations anchored to places of interest. (Unlike the dark, closed goggles of VR, AR glasses use see-through technology to insert virtual apparitions into the real world.)

Eventually we’ll be able to search physical space as we might search a text—“find me all the places where a park bench faces sunrise along a river.” We will hyperlink objects into a network of the physical, just as the web hyperlinked words, producing marvelous benefits and new products.

The first big technology platform was the web, which digitized information, subjecting knowledge to the power of algorithms; it came to be dominated by Google. The second great platform was social media, running primarily on mobile phones. It digitized people and subjected human behavior and relationships to the power of algorithms, and it is ruled by Facebook and WeChat.

We are now at the dawn of the third platform, which will digitize the rest of the world. On this platform, all things and places will be machine-­readable, subject to the power of algorithms.

Microsoft has been producing its HoloLens AR devices since 2016. The HoloLens is a see-through visor mounted to a head strap. Once turned on and booted up, the HoloLens maps the room you’re in. You then use your hands to maneuver menus floating in front of you, choosing which apps or experiences to load. One choice is to hang virtual screens—as in laptop or TV screens—in front of you.

In 2018 the US Army announced it was purchasing up to 100,000 upgraded models of the HoloLens headsets for a very nondesk job: to stay one step ahead of enemies on the battlefield and “increase lethality.”

For the mirrorworld to come fully online, we don’t just need everything to have a digital twin; we also need to build a 3D model of physical reality in which to place those twins. Consumers will largely do this themselves: When someone gazes at a scene through a device, particularly wearable glasses, tiny embedded cameras looking out will map what they see. The cameras only capture sheets of pixels, which don’t mean much. But artificial intelligence—embedded in the device, in the cloud, or both—will make sense of those pixels; it will pinpoint where you are in a place, at the very same time that it’s assessing what is in that place. The technical term for this is SLAM—simultaneous localization and mapping—and it’s happening now.

Augmented reality is the technology underpinning the mirrorworld; it is the awkward newborn that will grow into a giant.

The full blossoming of the mirrorworld is waiting for cheap, always-on wearable glasses. Speculation has been rising that one of the largest tech companies may be developing just such a product. Apple has been on an AR hiring spree and recently acquired a startup called Akonia Holographics that specializes in thin, transparent “smart glass” lenses. But you don’t need to use AR glasses; you can engage using almost any kind of device.

New technologies bestow new superpowers. We gained super speed with jet planes, super healing powers with antibiotics, super hearing with the radio. The mirrorworld promises super vision. We’ll have a type of x-ray vision able to see into objects via their virtual ghosts, exploding them into constituent parts, able to untangle their circuits visually. A properly educated person will be able to create a 3D image inside of a 3D landscape nearly as fast as one can type today. They will know how to search all videos ever made for the visual idea they have in their head, without needing words. The complexities of color and the rules of perspective will be commonly understood, like the rules of grammar. It will be the Photonic Era. 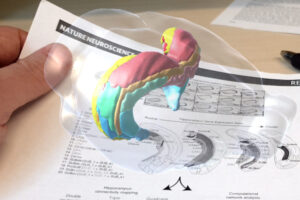 Like the web and social media before it, the mirror­world will unfold and grow, producing unintended problems and unexpected benefits. The emergence of the mirrorworld will affect us all at a deeply personal level. We know there will be severe physiological and psychological effects of dwelling in dual worlds. The great paradox is that the only way to understand how AR works is to build AR and test ourselves in it. It’s weirdly recursive: The technology itself is the microscope needed to inspect the effects of the technology.

Many of the risks of the mirrorworld are easy to imagine, because they are the same ones we see on current platforms. The mirrorworld will raise major privacy concerns. It will, after all, contain a billion eyes glancing at every point, converging into one continuous view. The mirrorworld will create so much data, big data, from its legions of eyes and other sensors, that we can’t imagine its scale right now. To make this spatial realm work—to synchronize the virtual twins of all places and all things with the real places and things, while rendering it visible to millions—will require tracking people and things to a degree that can only be called a total surveillance state. We reflexively recoil at the specter of such big data. We can imagine so many ways it might hurt us.

But we already have some experience that can inform our approach to the mirrorworld. Good practices include mandatory transparency and accountability for any party that touches the data; symmetry in the flow of information, so that the watchers are themselves watched; and the insistence that data creators—you and me—receive clear benefits, including monetary ones, from the system.

I imagine it will take at least a decade for the mirrorworld to develop enough to be used by millions, and several decades to mature. But we are close enough now to the birth of this great work that we can predict its character in rough detail.

Eventually this melded world will be the size of our planet. It will be humanity’s greatest achievement, creating new levels of wealth, new social problems, and uncountable opportunities for billions of people. There are no experts yet to make this world; you are not late.

Kevin Kelly (kk@kk.org) was WIRED’s founding executive editor. He’s the author of The Inevitable: Understanding the 12 Technological Forces That Will Shape Our Future and many other books, including What Technology Wants; New Rules for the New Economy; and Out Of Control: The New Biology of Machines, Social Systems, and the Economic World.