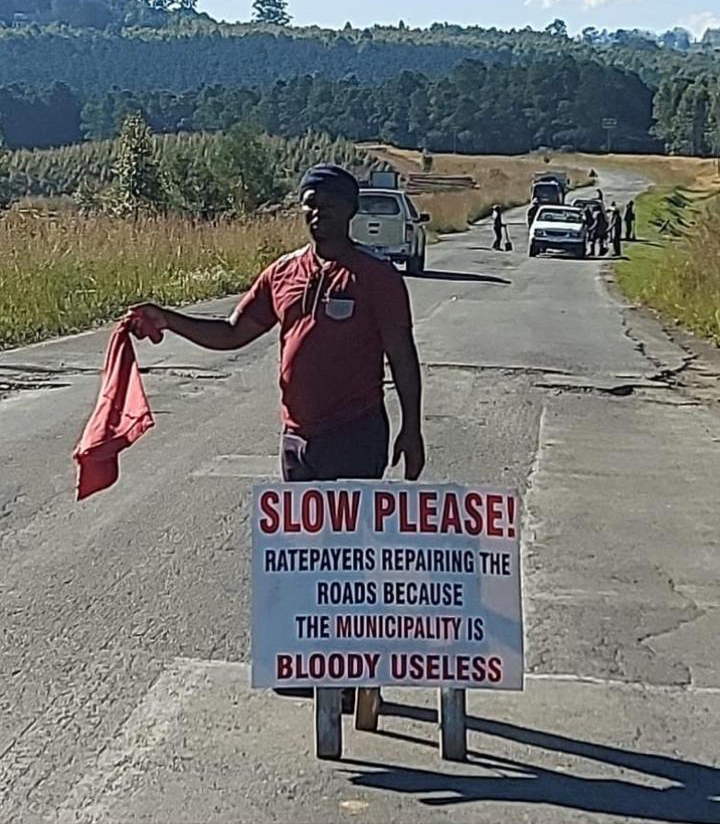 DURBAN – A HOWICK resident, who has opted to repair a pothole-riddled road near his home, says he stepped up to do the work because he wanted to be a responsible citizen.

The UMngeni Municipality, under which the area falls, has been the subject of criticism, and there have been threats of reporting it to the president because of declining service delivery.

Jonty Myhill opted to repair Curry’s Post Road himself, in a move that has created temporary work for some locals.

“It is no use complaining and blaming others. In some instances, you just have to do the work yourself,” he said.

He emphasised yesterday that he didn’t bear a grudge against the uMngeni Municipality over the state of disrepair of some of the roads in the area.

He also added that a message on a signboard to notify motorists of the repairs, which had caught the attention of social media users, had not been written by him.

Myhill said he lives on a smallholding with his family, including his parents, and he loves the area in which he has lived for the past 35 years.

He said the issue of roads with potholes was not only a problem in Howick and people were upset about the state of roads across the country.

“Everywhere you go, there are problems with potholes in the roads. Personally, though, I hold no grudge against them,” said Myhill. He insisted that the move was a sign of being a responsible citizen. I have been voting in all the elections over the past years and will continue doing so,” he said.

UMngeni Municipality spokesperson Thando Mgaga said it was finalising a plan to repair and revamp roads that were in ruins because of potholes, including Karkloof Road, Ogilvie Road, Curry’s Post Road and Hilton Avenue.

He conceded that although the municipality was committed to repairing the roads, they were hamstrung by financial constraints.

“We appeal to the members of the public to bear with us,” said Mgaga. “By the same token, I wish to assure them that plans are in motion within the limited resources.”

Curry’s Post Conservancy chairperson Wendy Channing said the state of roads in Howick had become a source of concern for all road users.

She said that some businesses had closed down because people were fearful of driving on roads that had become “deathtraps”.

How Job Insecurity Can Change Your Personality

This site uses cookies. By continuing to browse the site, you are agreeing to our use of cookies.

We may request cookies to be set on your device. We use cookies to let us know when you visit our websites, how you interact with us, to enrich your user experience, and to customize your relationship with our website.

Click on the different category headings to find out more. You can also change some of your preferences. Note that blocking some types of cookies may impact your experience on our websites and the services we are able to offer.

These cookies are strictly necessary to provide you with services available through our website and to use some of its features.

Because these cookies are strictly necessary to deliver the website, refusing them will have impact how our site functions. You always can block or delete cookies by changing your browser settings and force blocking all cookies on this website. But this will always prompt you to accept/refuse cookies when revisiting our site.

We fully respect if you want to refuse cookies but to avoid asking you again and again kindly allow us to store a cookie for that. You are free to opt out any time or opt in for other cookies to get a better experience. If you refuse cookies we will remove all set cookies in our domain.

We provide you with a list of stored cookies on your computer in our domain so you can check what we stored. Due to security reasons we are not able to show or modify cookies from other domains. You can check these in your browser security settings.

We also use different external services like Google Webfonts, Google Maps, and external Video providers. Since these providers may collect personal data like your IP address we allow you to block them here. Please be aware that this might heavily reduce the functionality and appearance of our site. Changes will take effect once you reload the page.